Caught in the line of fire 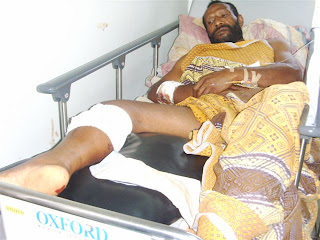 Caption: Villager John Agaundo Bongro, 50, recovering at the after he was shot at the roadblock. The bullet was said to have penetrated and smashed a bone below his right knee. Tension is still high in the area following the shooting.

CHIMBU police are investigating an attempted highway robbery, the discharging of a firearm by a parliamentarian and the shooting of an elderly man on the at the weekend, The National reports.

region police commander Simon Kauba said yesterday he had called for an investigation as relatives of the wounded man and the politician accused each other of starting the trouble as the situation remained tense overnight.

The MP told The National he had acted in self-defence to protect his family and K120, 000 in cash he was carrying by firing his licenced gun into the air to scare off people manning a roadblock at the Urinigle section of in Kerowagi between 6.30pm and 7pm last Sunday.

“I did not shoot anyone; any medical report and police investigations will reveal the truth,” he said following claims by Urinigle clansmen that John Agaundo Bongro, 50, was shot at the roadblock and the bullet penetrated and smashed the bone below his right knee.

The politician said the money was pay for day labourers and five men, who knew he was carrying it, had attempted to steal it.

“I gave them K100 and, as I was trying to leave, another group hiding at the back came out and attacked,” he said, adding that Bongro might have received knife wounds from that attack.

He said by then, reinforcement from his tribe arrived at the scene and a fight broke out with both sides armed with knives, axes and firearms, prompting him to fire shots into the air.

The MP said he did not want further trouble and was negotiating with police to mediate for a peaceful solution and to iron out differences and any misunderstanding.

Provincial administrator Joe Kunda Naur had also asked for police to investigate and file a report at it involved a national leader.

Bongro, who is in stable condition, said from the bed yesterday he wanted a police investigation to determine who shot him.

“I want to go to court to ensure justice prevails and those responsible are prosecuted,” he said in Tok Pisin.

Eyewitnesses confirmed some parts of the MP’s version of events.

They said a group of young men, apparently drunk, had tried to stop the politician’s vehicle as it was passing.

They said two men travelling with the MP got out and assaulted them. Later, the MP gave the drunkards some money.

They said more trucks then arrived with the MP’s supporters and a fight broke out.

Eyewitness Francis Wauglabogl claimed Bongro was an innocent bystander who had gone to see what the fight was all about when he was shot.