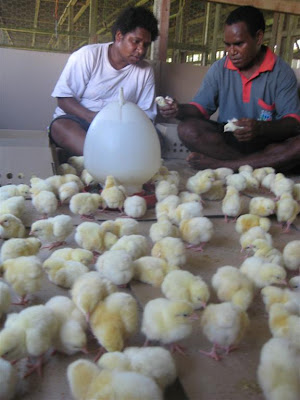 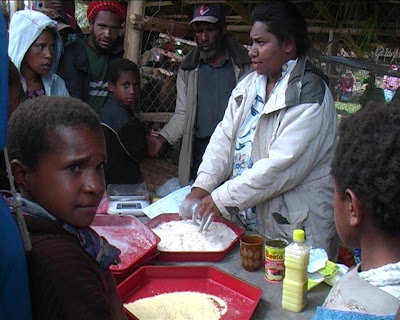 By JANET PANDI of NARI

The commercial livestock sector in is dominated by broiler chicken production due to a high demand for chicken meat.

The commercial frozen chicken market is largely based on smallholder contract growers selling chickens back to parent companies for processing and marketing.

Broiler meat production from this industry is estimated to be about 20,000 tonnes per year.

The commercial poultry industry in PNG is self-sufficient due to government policy on import bans and high tariffs on poultry products.

This sector provides a source of income, improved nutrition and services to meet socio-cultural obligations of farmers in rural villages and peri-urban areas of the country.

There are about 55,000 smallholder farmers who produce broilers for the informal live chicken markets.

The cash from this enterprise is the major source of income for these farmers.

This sector alone has an annual estimated value of AUS$6.7 million and rising.

Broiler day-old chicks are moved to remote communities by road, plane or boat, sometimes supported by government and NGOs.

Prices of commercially-produced feed and day-old-chicks increase the further one goes away from the mills and the hatchery due to freight charges.

They both supply the Ross 308 strain of hybrid chicken from .

Profitability of raising broilers is primarily constrained by input costs, and feeds remain the most-important cost item of broiler production as it accounts for up to 70% of the total broiler-growing costs.

Most ingredients used in these commercial broiler feeds are imported and retail prices of these feeds are quite expensive for the average smallholder farmer.

Economic viability of poultry production is more dependent on the price of imported grains than it is on growth rates.

Research at NARI is currently targeted at utilising locally-available resources to reduce the proportion of imported ingredients so as to reduce feed costs.

Modern day husbandry practices are based on use of cereal-based feeds and profitability is dependent on access to cost-effective diets.

It involved the direct participation of public and private sector operators as well as NGOs to evaluate options for their inclusion in poultry rations.

The aim was to increase/maintain profitability of smallholder poultry producers in PNG through the provision of information that will enable farmers/commercial millers to use lower-cost rations using these materials.

The project also established a feed testing facility at NARI’s livestock research centre in Lae to conduct feed evaluations and the institute now has the capacity to do nutritive profiles of feed materials.

The establishment of this facility is essential for the long-term viability of smallholder production sector through the development of lower cost rations.

There are opportunities to improve profitability by using local feed materials in rations for finishing broilers.

Using these materials may lengthen the grow-out period by 5-10 days, but increase the profit margin.

Farmers have limited knowledge and information on how to formulate balanced rations using these materials.

Some of these local feed materials are traditional staple crops, agro-industrial by-products, grains, legumes and high protein sources such as fish meal, meat and bone meal.

Despite a rich array of these local materials, proper processing and preparation to forms acceptable by chickens must first be attained.

Several of these tested materials (copra meal, pyrethrum marc, and traditional staples such as cassava, sago and sweet potato) had high feeding values and were considered to be used as concentrates.

On station experiments using these concentrates for finishing broiler chickens showed promising results and a concentrate was formulated mainly with copra meal and fish meal which was further tested by an on-farm evaluation.

This on-farm experiment assessed how well chickens grew on a diet comprising this poultry concentrate with cooked sweet potato against a commercial diet.

From these results, a concentrate feed was formulated for use with local energy sources for finishing off broiler chickens.

Three feeding strategies are available for poultry farmers to adopt and optimise profit.

These options include the utilisation of local feed ingredients in complete ration formulation, mixing with concentrate diets or by diluting commercial diets with local ingredients.

In conclusion, the smallholder broiler sector is thriving due to increasing demand for chicken meat in PNG and the ever-increasing retail prices of commercial broiler feeds poses a constant challenge.
Farmers are now exploring ways of combating this issue by looking at alternative ways of reducing input costs involved in raising broiler chickens
Posted by Malum Nalu at 6/22/2010 07:05:00 PM