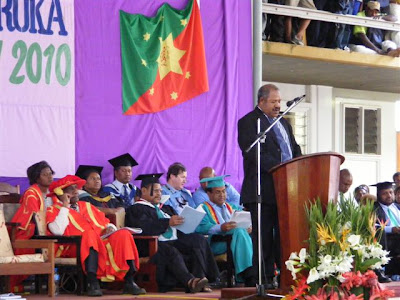 By KATE GUNN of UOG

On Friday June 11, 2010, the University of Goroka hosted its 13th graduation ceremony.
A large crowd gathered at the campus to witness the graduation for a total 564 people.
They were officially welcomed by the Chancellor of UOG Benais Sabumei to the graduation.
Mr Sabumei highlighted the fact that UOG now had a full council and it was their special honour and privilege to be part of the graduation.
He encouraged all staff and students of the university to “work together to do everything possible to change the past history of instability by putting aside personal differences”.
Mr Sabumei concluded his welcome speech by congratulating the graduands on their achievement and advising them to give their best in their chosen professions with honesty, commitment and responsibility.
He then officially opened the graduation ceremony.
Acting vice chancellor David Avei-Hosea in his speech on the day commented on UOG’s highlights so far for the year.
These included the hosting of two of the first-ever international conferences held in PNG on dance and early childhood respectively.
Mr Avei-Hosea also congratulated the very first two graduands from the Diploma of Museum Studies course, a direct result of the partnership with the National Museum and Art Gallery in Port Moresby.
Acting director of the PNG National Museum and Art Gallery Meck Kuk was witness to the graduation, where he presented a cheque for K30, 000 to Mr Avei-Hosea as a donation to support the Pacific History Conference which will be hosted at UOG from Sept 12-16 this year.
Guest speaker at the graduation was Powes Parkop, MP, and Governor of NCD, who stated he was impressed by the number of graduands and the variety of degrees studied at the university.
He appealed to all at UOG to move forward and resolve conflict so the university could continue to play a pivotal role in education from the base of its rich history.
Mr Parkop strongly stated: “Our people and our nation need this university to continue to function [and] to produce graduates who will shape our nation and the future.”
He also commented on the need for an educated and skilled population for a prosperous nation. To conclude Mr Parkop reminded the graduands of the need for quality leadership in schools and the classroom to impact on students, co-workers and peers.
The ceremony also included the presentation of prizes awarded to graduands for leadership, academic excellence, teaching practice, professionalism and charity.
Entertainment for the ceremony was provided by Expressive Arts (music and dance) students in spectacular form.
Posted by Malum Nalu at 6/16/2010 04:00:00 PM