A taste of honey at Kerevat 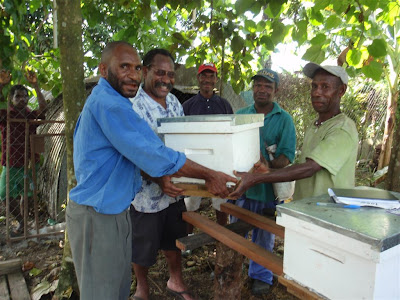 By WADAMU PALAU of NARI

National Agricultural Research Institute (NARI) at Keravat in East New Britain now has honey bees buzzing the station’s length and breath for nectar from the surrounding rich floral environment.
An apicultural expert, Tella Loie, from Eastern Highlands provincial Department of Agriculture and Livestock (DAL), was in the province recently distributing beehives.
NARI Keravat received two beehives for multiplication, splitting and eventually distributing to farmers.
Hands on training will be conducted for bee farmers in the later phase of this new project.
Honey bees (Epis Mellifera) are used for honey production and the one in Papua New Guinea is a European breed having yield capacity of 25 – 30kg of honey per annum.
Its productivity outweighs the native Asian breed (E.Cerana), regarded as wild honey bees, which yields a mere 2 – 3kg honey annually.
The recent bee hive distribution in East New Britain province was a joint initiative of the EHP Bee Farmer’s Association, Eastern Highlands provincial DAL, national DAL, Livestock Development Corporation (LDC), National Agricultural Quarantine Inspection Authority and the PNG Growers’ Association.
These organisations combined forces to introduce honey bees into the province.
The exercise is an alternate venture to promote to farmers whose household incomes have been affected by the deadly cocoa pod borer.
Dr John Moxon of NARI Keravat thanked the institutions for choosing Keravat to be a multiplication site and assured them of the safety and care of the bees and the hives.
He added that Keravat introduced bees in the early 1990s for crop pollination and crop yield evaluation, but lost them to the volcanic eruption in 1994.
It is anticipated that with the current reintroduction, some researchable apicultural issues will be identified and addressed to promote honey production in the province and the Islands region.