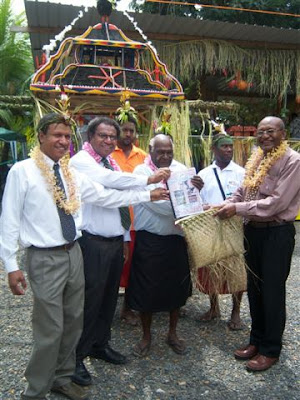 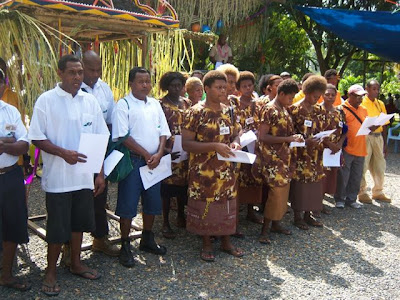 CCI staff based at Tavilo, ENB, prepare to sing the national anthem during the launching

The national and provincial Governments continue to realise and appreciate the importance of agriculture as the sector that sustains the livelihood of over 85% of the population in PNG.
It is therefore important that practical goals and objective must be in place to ensure that agriculture regains its position as the prime contributor to the national and provincial purse.
This is something that was significant many years ago and calls for greater cooperation not just to implement government agriculture policies but also to take decisive steps in actively promoting private and public partnership and investments.
This was the message delivered by East New Britain Governor Leo Dion when launching the PNG Cocoa Coconut Ltd strategic plan 2010-2019 at Tavilo last week
. The launching also coincided with the release of the new Integrated Pest and Disease Management technology.
Mr Dion stressed that the national government must continue to give priority in its future national budgets to the agriculture sector despite the current boom in minerals, gas and oil industries.
He said PNG was where it was today because of the agricultural commodities such as cocoa, coconut, coffee, rubber and oil palm industries and not the minerals which began only recently.
“I strongly believe and say that with the kind of money being picked up from the gas and oil industries it is imperative to say that the agriculture sector is assisted and further boosted and this is the reason why we need to have strategies in place like the CCI strategic plan,” Mr Dion said.
He continued that the Government had developed the export-driven economic recovery police as reflected in the MTDS 2005-2010, and further reflected under the ENB provincial economic development plan together with the growth centre strategy.
The CCI strategic plan is the starting point and lays the foundation for important happenings for the organisation and will promote transparency and accountability in the cocoa and coconut industries.
This plan will also support provincial plans and policies in place to increase productivity by rehabilitating and expanding cocoa and coconut through best management practices and high yielding varieties.
Mr Dion stressed that his government was mindful of the public-private partnership which had strengthened cooperation in the implementation of major government initiatives such as the agriculture integrated projects, spices, food production, copra and the cocoa pod borer project.
He said the provincial government would continue to work closely with CCI and relevant agencies such as Kokonas Indastri Koporesen, Cocoa Board and other stakeholders in sustaining the cocoa and coconut industries and realise the aims of the strategic plan.
CCI chairman Peter Tokele described the new CCI strategic plan as another milestone to move the cocoa and coconut industries forward into the future. The vision and expectations can only be realised if people and communities are empowered to participate as productive citizens in agriculture and other industries, instead of passive recipients of government provided services, as is the case today.
People empowerment, in particular in agriculture production and export, is dependent on the research and development and extension services provided by organizations such as CCI.
CCI acting chief executive Dr Eric Omuru said the new plan emphasised on impact at farm or people level, and a shift away from a supply-oriented approach to one that was demand-driven.
It also promotes partnerships with key stakeholders and others along the cocoa coconut value chains.
The vision of the plan is “prosperous, happy and health rural communities; dynamic, innovative and sustainable” cocoa and coconut industries, which is an ideal future for CCI and the two industries.
Dr Omuru said CCI had recognised that a lot of well-targeted work would be required to realise this future and with it meet the aspirations of the people in the rural areas.
He said, “at last we have a road map to service farmers and those along the cocoa and coconut value chain with purposefulness”.
He also commended the Australian Government initiative, Agricultural Research and Development Support Facility (ARDSF) for helping CCI in developing the strategic plan.