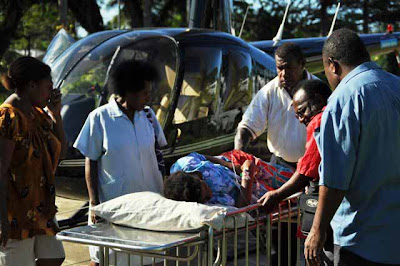 The snakebite victim being rushed into from the helicopter.-Picture courtesy of SIR PETER BARTER

A pregnant mother of four from Igos, near Mikarew in the Bogia district of Madang was medevaced to on Sunday after she was bitten by a suspected death adder.

She was in very serious condition.

She is reported to be recovering but according to Dr Maihua has lost her baby.

The Melanesian Foundation is a non-profit organisation that depends on Sir Peter and his company, Melanesian Tourist Services, to largely fund a number of projects including the operating costs of the helicopter where no charge is made but hopefully, costs of fuel will be paid to recover the high costs of maintaining a helicopter.

“The Melanesian Foundation has also funded the replacement of the roof on ,” Sir Peter said.

“The consignment of roofing is expected to arrive in Madang from Lae this week when it will be trans-shipped to Karkar so work can begin on replacement of the existing roof which was installed more than 50 years ago.

“The cost of the replacement roofing is estimated to be around K150, 000.”