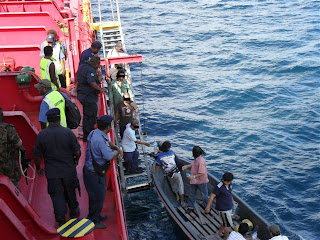 An oil tanker, chartered by a Singaporean company and laden with K40 million worth of suspected stolen crude oil, was detained in by officers of the PNG Customs Service and PNG Defence Force last Thursday, The National reports.

The HMS Rabaul crew of 21 Asians was then brought to Kokopo for questioning, arriving yesterday, where the 21 Asians boarded a motorised dinghy to the Rabaul wharf beachfront and were loaded onto a waiting police truck and taken to the Kokopo police station.

Two were also arrested and charged with possessing pornographic materials.

The others were released and placed under arrest on the vessel.