Memories of the kiap days 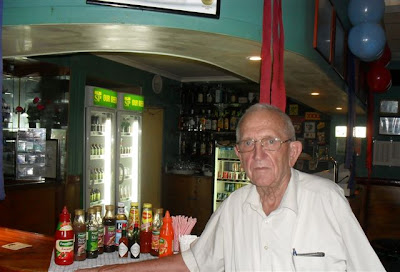 Graham Pople in his new role as a publican at the Weigh In Hotel.-Picture by MALUM NALU 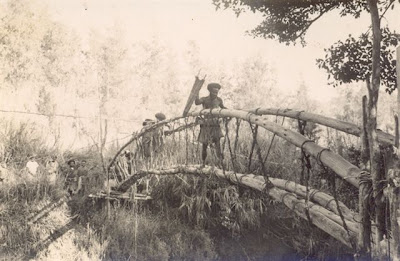 Traditional bridge over a river in Laiagam.-Pictures by GRAHAM POPLE 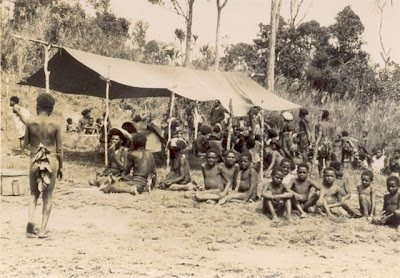 Preparing for a census in Laiagam in 1959
Getting a log for a bridge in Laiagam, then part of Western Highlands, in 1959 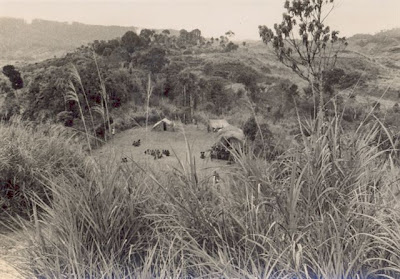 A typical camp site in the Highlands

Over the Queen’s Birthday long weekend, I had the privilege of browsing through the never-before-published autobiography and patrol diaries of Graham Pople, a former kiap (patrol officer) and Member of the first Papua and New Guinea House of Assembly in 1964.

Simply titled The Popleography, it gives a fascinating insight into life in the then and NG in those far-off pre-independence days, as well as our political infancy.

It’s an honest-to-god article by a real maverick kiap, reminiscing about the hard yards and slogs, seat-of-the-pants boat and plane rides, washed down by maudlin escapades of beers, wines and spirits in those amazing colonial days.

In those early days, despite many of our people being “primitive”, at least services such as health, education and law and order flowed to them.

Now aged 75, and a citizen of PNG – who received his papers from Sir John Guise on Sept 16, 1975 - who runs the Weigh In Hotel at Konedobu in , Pople says he put together the document at the behest of his children.

Drop in at the Weigh In any day of the week and chances are you’ll meet Pople – as animated as his kiap days - at the bar and he’ll give you a comprehensive history lesson about PNG.

Graham Pople was born in Armidale, New South Wales, on March 14, 1935, and in 1956 came across an advertisement for cadet patrol officers to go and seek life and adventure in the “dark unknown” – PNG.

He applied, was accepted, and in March 1956, departed on a Qantas DC4 for PNG, a land which would become his home.

The Popleography makes one realise how far PNG has gone backwards, especially in the context of towns such as Daru, Minj, Banj and Kainantu: now shocking skeletons of their glory days.

The epitome, perhaps, is the reading of Pople’s description of Kainantu in the 1960s.

“Kainantu was a lovely little town in the early ‘60s and was thriving based many coffee plantations being established in the area and also of gold,” he recalls.

“Kainantu had been the centre of gold rushes in the early 1930s and Ted Ubank and Noel Stagg, two prospectors from that era, were still mining in the area.

“Ken Rehder also operated a small gold mine at Binamarien as an adjunct to his two small coffee plantations.

“The Summer Institute of Linguistics had their PNG headquarters at Ukarumpa, just over the hill from Kainantu – some five miles or so away – which was also where the Aiyura agricultural station was established.

“So there was a quite large, for a sub-district office, non-indigenous population in the area.

“Kainantu had its own airstrip, and the town had grown up around this feature, with the district office on the northern side and the hospital at the southern western end.

“There was a nine-hole golf course with a very well-frequented club house.

“A hotel sat on a knoll above the main township.

“This was managed by a Dutch couple who were very hospitable.

“The Salvation Army were active in the area also.

“Out on the road to Okapa they had a block of land on some 200 acres where they were growing potatoes commercially and where they held Bible classes.

“In Kainantu itself they had a small station where there were two nursing sisters who assisted in running the hospital, assisting the doctor and the medical assistant.

“It was a growing town and there were several commercial businesses in the town itself.

“Jan Boij and his brother ton had a service station, which included a trade store and they later built a butcher’s shop there.

“I think, from memory, they may also have had a small bakery operating.

“Jack Scurrah ran a store on behalf of Buntings, while Dick Miellear also had a store and associated businesses including trucking.

“Burns Philp also ran the main store for the township.

“The Government was well represented with the Native Affairs staff, medical staff, an agricultural officer, one or two education officers, a mechanic, a policeman, a labour officer, a district officer/clerk and probably some others who I have forgotten.

“But based on coffee, gold and government services, Kainantu was a bustling and growing township.

“The residents proudly called it ‘The Mile-High Gateway to the Highlands’ as its elevation was allegedly 5, 280 feet above sea level.

“On the road towards Goroka, the Lutheran Mission had quite a big station, named Raipinka, which they had established in the early 1930s and had developed since.”

In those days, the New Guinea side of the country, being a Trust Territory was constantly under the watchful eye of the United Nations and they had decided that the country should be pushed towards self-government and eventual independence.

To placate the United Nations, and to show evidence that Australia was aware of the necessity for political evolution, a common roll of voters was drawn up, listing all the people who were eligible to vote.

The country was then divided into electorates in two categories: reserved and open.

Pople at this time was senior administrative official at Gumine and was asked by the locals to represent them in parliament, and he was successfully elected.

He recalls that none of the new Members, even those in government, seemed to know what they were supposed to do or what their powers were.

“Of course, there was also the clique of ex patrol officers which stuck pretty well together and had some experience with the rank-and-file members who looked to this group for guidance,” Pople says.

“But we were all tyros, with the exception of the few that had some experience in the Legislative Assembly, and most of us thought it would prove to be a rewarding experience.

“Unfortunately, the records that I kept of newspaper clippings and other articles in which I featured during the period of my occupancy of the House of Assembly, 1964 to 1968, have been destroyed and I have nothing to which I can refer except for a very-fallible memory.”

Pople believes that self-government and independence came too early for PNG.

“My own personal view is that the declaration of self-government was early but could have been handled okay if the interval before independence could have been lengthened,” he says.

“More emphasis should have been in the 1960s and 1970s in educating more senior public servants from the national sector.

“They should have been educated at universities and similar institutions overseas to get the necessary exposure to other cultures and people from other countries in similar positions from countries faced with similar development problems.

“But this was not to be and the establishment of the University of PNG in the late 1960s then made it obligatory, from a point of pride, that all training would take place in-country and so our potential leaders, lost that opportunity of exposure to other cultures which could have made a big difference to our development.

“I know that there are many people, mainly academics, who would oppose my point of view, claiming it was more essential to develop a national identity, but these are my personal views for the information of my children.

“Despite the early declaration of independence and the paucity of training for future leaders, PNG has now been independent since 1975, and we are all aware of how the country is faring and has fared.

“But would later independence with the training I suggested have made any difference?

‘No one knows and it is impossible to tell, and so it is a useless debate.”