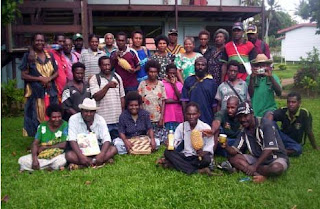 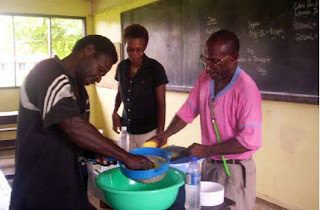 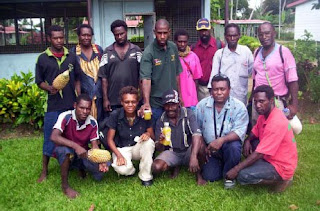 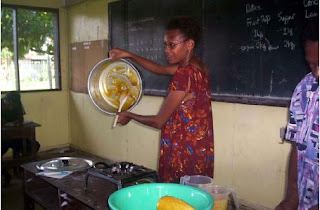 Captions: 1. Participants of the pineapple training workshop at . 2. A participant from Dimiri village (left) and South Fly agricutltural officer Ginoi Waina trying out the grating and filtering stages of making pineapple juice. 3. Dimiri participants and trainers posing for a group photo after the pineapple processing training at . 4. Isidora Ramita of NARI showing the formation of pineapple jam jelly during one of the demonstrations on fruit processing.

Fruit farmers in Western province can now produce their own juice and jams from pineapple, thanks to National Agriculture Research Institute for training on food processing which was conducted recently in Daru.
Thirty fruit farmers in the Dimiri area of Moreheard LLG, South Fly district, attended the two-day training conducted by NARI food technologist Isidora Ramita.
It was facilitated by James Ernest of NARI Laloki and Ginoi Waina of division of agriculture, South Fly.
It was part of the Morehead Food Security Support Project funded by PNG Sustainable Development Programme and NARI in 2008.
Mr Ernest said commercial production of fruits and vegetables was increasing in some parts of PNG.
However, during post-harvest and delivery to markets, there is substantial lose of produce due to over ripening or rotting and careless handling.
He said fruit producers generally lacked the skills and techniques in proper processing, preservation and adding value to their produce.
Mr Ernest, who is also the coordinator of this technology transfer project, noted in the training report that pineapple farmers in the Dimiri community planted some 26,000 pineapples as an income generating project initiated by the villagers themselves.
The pineapples were harvested and sold at the local market in Daru town for K 2 to K4 a fruit but the villagers could not sell all the harvests, resulting in a huge lose due to over ripening.
After identifying the problem, NARI organised the raining workshop last December.
Mr Ernest said the project provided an alternative by training the producers the simple food processing technologies on making pineapple juice and jams.
It was also aimed at reducing transportation cost and adding value to the produce which can be sold to earn higher income or extended storage for later use.
He said one of the key components of the project was to provide appropriate farmer trainings to enhance skills and knowledge of the rural people both in farming practices and simple food processing technologies.
The participants stated that the training was the first of its kind to be conducted in Daru, particularly in the South Fly, and asked for more.
According to Mr Ernest, the participants also raised concern about the importance of the training and the need for the trainers and facilitators to have ample time doing awareness of such training to attract more number of potential participants.