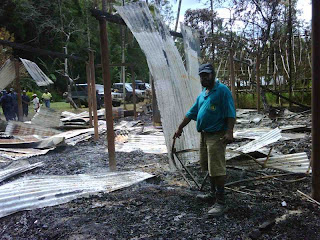 Caption: Burnout remains of a house at Kaisenik village in Wau yesterday. Picture by SAM BASIL.

Violence erupted in Wau, Morobe province at the weekend, leaving three people dead, several injured, houses and property destroyed, and forcing the temporary shutdown of the gold mine and the evacuation of employees.

The incident comes just before is to pour its first gold and could have severe repercussions for on the international mining scene.

A long-standing land dispute between Biangai and Watut tribes over ownership of the 2076 hectare between Wau and Bulolo came to a head last Friday and Saturday as the Watuts gathered in Wau in their hundreds and staged an early morning attack on the Biangai villages.

’s emergency ward today (Sunday) confirmed receiving the bodies of two men and admitting two other with shotgun pellet wounds while several others were said to have been treated in Bulolo for pellet wounds.

A Watut man was allegedly killed recently by Biangais over a gold-bearing piece of land on the national park, which is said to have sparked the tension.

He said a 15-year-old paralysed boy was burned alive in a house and an old man was murdered by the Watuts and other opportunists, who numbered more than 1,000.

Mr Tilae said that last Saturday, the Watuts gathered en masse and were trying to advance on Wandumi, when they were halted by police.

“We had reinforcements from Lae and they managed to contain the situation at ,” he said.

“The Wandumis shot five Watuts that morning, who were taken to hospital, including one dead.

“Shops are closed, people are not moving around.

“Things are very tense at the moment.”

Mr Tilae said other people took advantage of the situation to converge on the gold mine.

“There’s a group of Watuts up there demanding things from the company.

“We don’t know what exactly they are demanding.”

A Morobe Mining Joint Venture spokesman said today: “It was just opportunists that were taking matters into their own hands.

“It’s mainly in Wau that the skirmishes are.

“There were those who were looking to get into the mine.

“We beefed up all our security to counter that.

“The situation got volatile last Friday and as a precautionary measure, we had to move the families that were situated in Wau to Lae.

“We’ve secured the entrance to the mine so that only absolutely-essential traffic comes inside the gate.

“I understand that because of the disturbance, and the possibility of opportunists, we’ve just suspended operations for the time being.