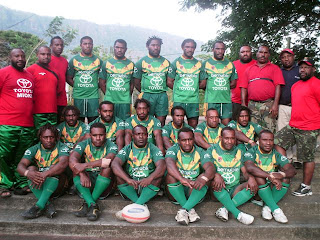 By BURI GABI of The National, Papua New Guinea's No. 1 daily newspaper

THE pride of Enga, Toyota Mioks, want nothing less than the bemobile Cup when they take on bitter rivals Agmark Gurias in the bemobile Cup grand final at the Lloyd Robson Oval in Port Moresby on Sunday.
Mioks’ Captain Courageous David Ako is determined to win for the people of Enga, major sponsor Ela Motors and diehard supporter and Enga Governor Peter Ipatas.
This is despite the myriad of controversies which have beset the team this year.
“We been sleeping and eating together at the Sopas Adventist centre over the last 14 weeks, despite the controversial issues that affected the team and the camp,” he said.
“I’ve told my boys to play rugby league and give back the best results to the people of Enga.
“Let the board and management deal with those issues.”
He said his players had stood together as a despite despite all the setbacks.
Sunday’s game will be a repeat of the 2000 grand final in which the Mioks rode roughshod over the Gurias.
The men from the land of tubuans, dukduks and volcanoes look the have the more-experienced side with seasoned campaigners George Moni, Rodney Pora, Chris Purkikil, Chanel Aquila and Lasan Marabe leading the pack.
Ako is banking on the raging bull David Loko, Timothy Clement, Jonah Mackey, Miok Anjo and creative halfback Mose to lead by example.
With PNG Resident Kumuls halfback Mai Tom and regular five-eight James Meninga back from injury, the Mioks will prove a hard nut to crack for the Gurias.
“It’ll all boil down to defence, which has been a key aspect of our recent victories, as well as ball control,” Ako said.
“We’ll be giving it our all to take the bemobile Cup back to Enga.”