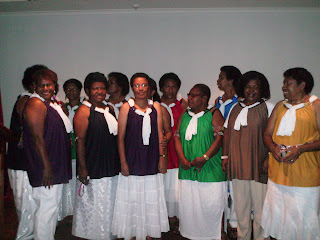 The all-woman fundraising committee at their dinner last Friday 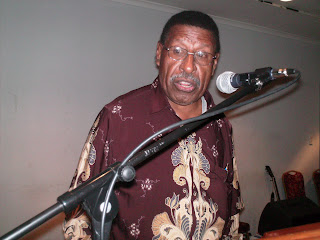 Rev Somi Setu makes a point at the fundraising dinner

Fundraising for the proposed Gordons Marimari Lutheran Church in Port Moresby is progressing well with another successful corporate fundraising dinner at the Grand Palace Restaurant last Friday.
The dinner was well attended by about 400 people, who paid K200 each, with pledges totaling about K43, 700 made.
The fundraising committee is made up of an all-woman crew, who since 2006, have raised about K300, 000 of a targeted K1 million.
Work on the proposed Marimari church building, designed by Rumbam Engineers, is expected to start in 2011.
“We started this fundraising activity in Oct 2006,” committee chairman Dennie Milan said.
“Up to now, we have raised about K300, 000.
“The committee is made up of all women.
“Hopefully, in 2011, we should set up the foundation.
“The target is K1m.”
Mrs Milan said the annual corporate dinner was the major fundraising activity of the last three years.
“Other church activities are a church fete, and a food fair where we cook different types of food and sell,” she said.
“We also have a special basket in front of the church every Sunday, where church-goers can make their offering.”
Evangelical Lutheran Church of PNG Southern region president Rev Somi Setu commended women fundraising committee members for their hard work over the years.
“We know that women can do great thing,” he said.
“It was about 10 years ago that the project was launched.
“It’s quite a long journey that the (Marimari) congregation has taken to come this far.
“Rome was not built in a day.
“It took many years for this city to be built.”
Those who made pledges during the dinner included Rumbam Engineering (K10,000); Kelly Naru (K8,000); Mondo Clothing (K6,000); Savo & Grace (K3,500); Dr Joseph Pagelio and family (K3,000); Sed Limited and Dr Korimbom (K2,000); Paul Mawa Lawyers (K2,000); Mr Kit Moya (K2,000); Gabriel Samol and family (K2,000); Rev Somi Setu and family (K1,500); Pacific Software (K1,000); Wendy Mawa (K500); and Thomas Laka (K200).
Posted by Malum Nalu at 10/26/2009 07:31:00 PM