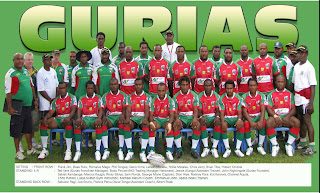 By BURI GABI of The National, Papua New Guinea's No. 1 daily newspaper

ANY competition starts with everyone wanting to win the title at the end, and the 2009 bemobile Cup is no exception.
NGIP Agmark Gurias team manager Ted Vere said this as his team prepares to play Toyota Enga Mioks in the bemobile Cup rugby league grand final at the Lloyd Robson Oval in Port Moresby on Sunday.
“I directed my boys to win all the seven home games at the ‘graveyard’ at the Kalabond rugby league ground in Kokopo, and at least win four away matches to secure a finals spot in the cup battle,” Vere said,
“But my boys have done extremely well to secure the first grand finals, and to add the icing, claiming the minor premiership tag for this year.
“Our aim now is to take home the cup to Rabaul to our rugby league-loving fans.”
The Gabagaba, Central province man, has adopted well in his new job and has successfully helped steer the Gurias into yet another grand final.
In 2005, the Gurias took the then SP Cup to Kokopo after defeating the Brian Bell Bulldogs from Port Moresby.
This year’s grand final appearance is the talk of Kokopo, with die-hard fans wanting nothing than the return of PNG rugby league’s Auld Mug to the land of tubuans, dukduks and volcanoes.
Hence the Gurias wanting nothing nothing less than to stand on the victory dais come Sunday.
“The victory is for our sponsors, the people of New Guinea Islands, and families of the dedicated players in the squad who have been together over last 14 weeks,” Vere said confidently.
Coach Michael Marum and Vere have been working extra hard over the last two weeks to get the boys together and bolster them to claim the bemobile cup.
The Gurias are not treating this game as anything special and are doing their normal preparations.
Vere says for for the Gurias to win, it will be a team effort from all 17 players and the big guns Diyon Aiye, George Moni, Kot Kerua, and Rodney Pora.
Rolly Matalau, Boas Ruru, Pidik Tongap, Channel Aquila and sneaky hooker Sakias Kambange are others who will be counted on.
“All our fans have been telling us to win this Sunday because both our U16 and U19 NGI teams have won this year’s zone titles, and to finish the year on the high note, it is the senior team who must claim the bemobile Cup competition,” Vere said.
He’s says it’s a big ask but the Gurias will be out to do the job.