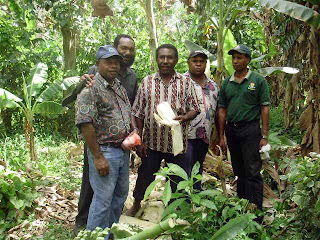 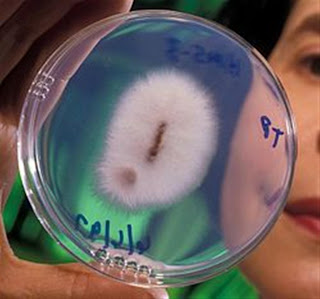 Fusarium oxysporum Foc, the fungus that causes Fusarium Wilt disease on bananas
By JOSEPHINE YAGA of NARI
Fusarium wilt, also known as Panama disease, is a destructive fungal disease of banana plants.
It is caused by a fungus referred to as Fusarium oxysporum f.sp.cubense (Foc).
According to Dr Agustin Molina, an international specialist on banana diseases and the regional coordinator for Asia and the Pacific Bioversity International, the disease has already been identified along the PNG - Indonesia border in the Indonesian provinces of Western Papua and Papua.
He cautioned that there was a great risk of the disease spreading across to bananas in PNG.
Once Foc is in the soil, it cannot be eliminated.
Dr Molina said this during a two-day workshop at Bubia in Lae recently.
The workshop was conducted for quarantine and extensions officers in PNG for increasing PNG’s capacity for early detection, interception and incursion management of Fusarium wilt and other important banana diseases.
Participants were from National Agriculture Research Institute, National Agriculture Quarantine Inspection Authority and Department of Agriculture and Livestock.
Banana is grown throughout PNG and it is the fourth most-consumed food with 34.3% after greens (75%), sweet potato (60.2%) and rice (35.1%).
It is considered the most-important staple crop with greatest production in Morobe, East New Britain, Central and Madang provinces.
Fusarium wilt of banana is a vascular wilt disease and can be very destructive.
It invades the vascular tissues called xylem through the roots causing discoloration and wilting.
The wilt pathogen is soil-borne and it survives in the soil for years.
It also survives on infected plant parts and infects roots, spreads and destroys vascular tissues.
The disease can be transmitted through suckers, roots, soil water and contaminated equipment.
The focus of the training was to improve capacity of extension officers to manage incursions of banana diseases into PNG with emphasis on measures to prevent the spread of Fusarium wilt across PNG-Indonesia Boarder.
Experiments in Indonesia were set up in an attempt to control the wilt.
The use of clean planting materials and resistant varieties are among the most promising measures identified so far.
Suggestions made at the workshop for the prevention or limitation of the wilt include:
• The need to evaluate important PNG banana varieties for resistance to Foc;
• Provide briefing papers on threat and potential impact of Foc and other diseases to policy makers;
• Better coordination of emergency response to relevant agencies and development at all levels;
• Formation of committees for further awareness-raising in the provinces along the border through local level government and ward presidents, church leaders and teachers; and
• Production of handbook of important banana diseases.
Posted by Malum Nalu at 10/29/2009 12:21:00 PM