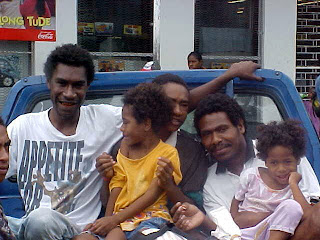 Caption: Jack and the gang on the weekend of Morobe Show 2002

We buried Jack at home in Butibam village, Lae, on Tuesday, November 2, 2004, under one of those typically-beautiful November afternoons.

He had just turned 21 that September, had a pretty Manus girlfriend and a bouncy seven-month son, and was eagerly looking forward to graduating from the in 2005 and becoming a music teacher.

All these hopes and dreams, however, were cruelly snuffed out like a candle in the wind when Jack’s heart gave way at the on the night on Monday, October 25, 2004.

Jack Remus Nawatz, elder son of my sister Alison and her husband Goromp Nawatz, was born with a heart defect in Lae on September 9, 1983.

It was something that doctors hoped would go away over time; however, this was not to be.

Alison and Goromp were then studying at the in Lae and I remember the unparalleled joy that Jack brought into our lives.

Since the two were busy at school, Jack’s grandparents – my mum and dad – looked after Jack as one of their own.

I remember that time in November 1983 when Jack was to be baptised at the in Lae.

My elder brother David, who had just graduated a day earlier from , sacrificed graduation parties to be with us for the day.

There is a picture somewhere in one of my old albums, of David and me carrying Jack the day of his baptism in 1983.

We carried his coffin that day.

Despite his short life on this earth, Jack brought so much joy and happiness into our lives.

He was never a strong child, because of his heart defect, and wasn’t actively involved in sports like many of his peers.

He would have made a very good basketball player – all six feet, four inches of him.

Jack, however, found his forte: music.

A very talented musician (Jack could play a variety of musical instruments) since his primary and high school days in Lae, Jack decided that this is what he must study.

I was then living and working in Goroka, with my wife and two sons, and Jack became very much a part of our young family.

Unfortunately, we had to leave Goroka in mid 2002 because my three-year work contract was up, and we left Jack behind.

He remained, and together with some of his best mates, formed a band that often performed at the .

I never realised how good a musician he was until last year, when I was up there for a weekend, I got to watch him play at a concert.

There couldn’t have been a prouder uncle!

In 2004, because his Manus girlfriend Evelyn was pregnant with their son Steven, the young couple was ejected from permanent accommodation by the seemingly-draconian administration.

They rented a backyard shed, down the hill from the university, and continued to look after their newborn baby while going to school.

Jack, with his weak heart, continued to trudge up the steep hill leading to the UOG – something that often made him sick.

In 2004, while in Goroka for the PNG Coffee Festival & Trade Fair, I fell very sick and was admitted to .

It was kind-hearted Jack and his UOG mates who looked after me.

I promised them drinks at the end of the year – this will never be now.

In October, he came to after final exams, and started complaining of chest pains and shortage of breath.

He was admitted to hospital, with a smile on his face for all family and friends who visited.

He was discharged, however, fell ill again was readmitted to hospital where the heart problem which had plagued him all his life finally claimed him.

I took a picture of Jack and his son Steven in Goroka in May 2004.

I took a look at the picture and was reminded of the Lion King, where Musfasa showed his son Simba the world, and said: “You are part of the never-ending circle of life.”