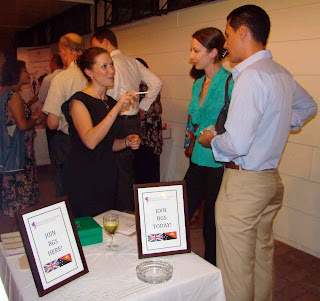 Caption: BGS events manager Jessica Johnston welcomes Dominic Seddon to the premiere of the BBC wildlife documentary at the residence of the British High Commissioner to PNG

Members of the British Graduates Society were given a special treat recently when they watched the premiere of hit TV documentary series "Land of the Lost Volcano".

British High Commissioner to PNG, David Dunn, who hosted the screening at his residence, said the wildlife TV programme was a big hit in the .

"A total of 15 million people in the were captivated by the breathtaking scenery and the discovery of new species in . The documentary is aimed at wooing a younger generation of conservationists in the UK and the world to follow in the footsteps of their seniors who grew up being inspired by David Attenborough wildlife documentaries,'' he added as he introduced the first episode of the three-part series.

The documentary was filmed early this year on and ' Mt Bosavi and followed an international team of scientists, cavers and wildlife filmmakers in the dense and treacherous PNG jungle.

In the BBC series, scientists assisted by tribal elders comb the jungle recording wildlife for a database which would be passed on to the PNG government at the completion of the identification process. They discover 40 species new to science that included amongst others a giant woolly rat and fanged frogs.

BGS vice president Hennie Ikupu said the documentary showcased PNG and confirmed its position as one of the world's top biodiversity hot spots.

"The documentary explicitly highlights the richness of PNG's biodiversity and its significance as the host of one of the world's largest and last remaining tropical rainforest areas," he added.

The screening of "Land of the Lost Volcano" is part of a lively event and activity calendar hosted by the BGS. The society has been active since 2006 and has recently increased its membership by over 60%. This has created a renewed and strengthened network of Papua New Guinean and expatriate members in business, education, development, Government and diplomatic services.

Anyone interested in joining the British Graduates Society of Papua New Guinea should email ukgradutes.png@gmail .com for further information.

The British Graduates Society of Papua New Guinea has been active since 2006. In July 2008 the Society was fully incorporated and registered with the IPA. The Patron of the Society is currently His Excellency David Dunn, British High Commissioner to .

The society is currently actively seeking new members. To be eligible as a member a person must have studied at a institution and pay a membership fee of K100 per annum. A person may also become an associate member if they are a spouse, partner or nominated person of a full member. Associate members must pay a K50 fee per annum.

Some of the objectives of the society are currently;

         To establish and maintain means of communication between members of the BGSPNG and their institutions through the British High Commission and Alumni Societies;

         To support and promote the principles of membership for all former students who have studied in the ;

         To sponsor and promote educational, social, cultural, sporting and recreational activities among members of the BGSPNG and their families;

         To promote and maintain for members of the BGSPNG a common meeting place and a social centre over the long term and to network with similar entities or organisations;

         To provide a forum for the dissemination, discussion and debate of information and knowledge about matters of former colleges, universities, or matters of public interest.