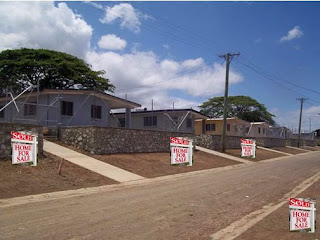 By RICHARD SAPIAS of Consap Developers
On the morning of Nov 10, 2008, the first set of graders belonging to Digara Construction moved in to what is now known as Stage Three of the Nasfund/Consap Developers housing project to begin the site works.
Just under 12 months later, the housing project, which involved the construction of 47 brick houses have been sold out.
This was broken up between 22 two-bedroom houses and 25 three-bedroom houses.
The interesting fact in reviewing the data of this project is this emerging PNG middle class.
This was unknown and certainly ungauged previously.
The take-up of housing within the K285, 000 through to K350, 000 for three bedroom homes evidenced this.
Whilst many analysts might want to tag the upcoming LNG project as the sphere of influence for the popularity of the Eight and Nine-Mile homes offered by NASFUND, I can attest that this is not the case.
The reason being is that the majority of purchasers are first-time home buyers happy to leave previously-rented accommodation and purchase their first home.
Thus the motivation to purchase was not about a speculative market influenced by an influx of workers or shortage of accommodation, but due to a general shortage of accommodation in the form of housing.
Marketing
Through the marketing period we encountered many interesting points of view which we take seriously and enter into a database for reference in future projects.
The sorts of queries were:
1. Is it a long way out?
2. Is it safe?
3. Can we purchase our own furniture?
4. I think I will wait for the next project at 8 mile.
Thoughts on housing at Eight-Mile, Nine-Mile and the City of Port Moresby
Whilst there is considerable construction activity going on within the city whether it be retail, industrial, commercial and top end residential,  the growing need to service housing for Papua New Guineans is still not being addressed by appropriate government institutions.
Our workforce is growing; our middle class is continuing to be the prevalent force in the open market of PNG owner-occupied residential pricing.
In short, I believe that the city is expanding out to Eight and Nine-Mile and it will not be limited to housing as there are already plans for schools, playing fields and Supermarkets.
Basic areas a developer considers prior to undertaking a residential subdivision project
As we continue to find ways to provide good quality housing in the city there are a number of issues that readers need to be aware of when a subdivision is planned.
1. The cost to provide the civil works – roads, curbs, drainage, water sewerage
At this stage, the cost of providing the infrastructure necessary for the residential   development rests in the basket of the developer.
That cost is obviously passed on to the purchaser.
At cost to develop land and not including the cost to purchase of the land or cost to construct the house is considerable at K80, 000 per 500 sq m.
Once you add the cost of land (depending what you buy it for), then your cost to construct the house the numbers start to stack up.
The risk to undertake a project such as this can be risky without pre-commitments or an active knowledge of the market available to you.
2. The purchase price of the land.
3. The style of housing that you are constructing and then selling.
4. Where the financial institutions are as far as their ability to lend and obviously the interest rates.
5. The area of the market most likely to be active and pay the costs of a subdivision.
The above areas of consideration are what influences a developers’ decision to build and it allows them to make decisions in relation to the project such as house type and sale price which ultimately, what the purchaser is interested in.
The new project - another 44 houses in Malolo Estate in 2010 - Stage 3
Consap Developers and Nasfund are proud to announce that we are entering Stage Three of our housing development beginning late 2009 and early 2010 and scheduled for final completion in Oct 2010.
The details of this subdivision will be made available to the public in early November 2009.
One unfortunate fact is that construction costs and development costs have increased significantly since the last project.