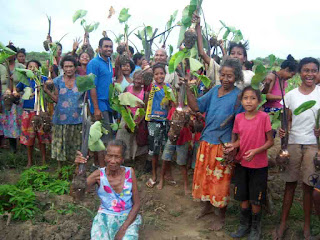 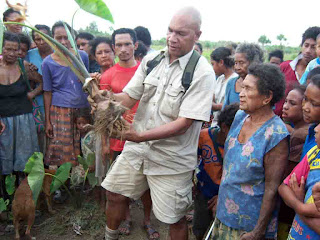 By SOLDIER BURUKA of Department of Agriculture and Livestock
Egalauna villagers in the Marshall Lagoon area of Central province are very much involved in taro cultivation on a large scale.
With the help of the Department of Agriculture and Livestock and other partners, the village people are learning new methods of planting taro and are pleased with their efforts so far.
Recently, the people made a big harvest and have secured markets for their taro produce in the nation’s capital.
The community has established the Egalauna Farmers Association with 200 members and whose objective is to promote agricultural farming skills, farmer training and extension amongst the villagers.
Late last year, DAL officers led by Francis Wambon, introduced the new taro-planting technique, which has been promoted through the European Union-funded Development of Sustainable Agriculture in the Pacific (DSAP) project.
One ha of land was ploughed and divided into 100 plots of 10m by 10m for each farmer to plant taro.
This taro project is the first of its kind in the Aroma coast based purely on taro farming using the DSAP concept.
DSAP has ceased in PNG, however, DAL is using the concept to continue promoting taro and institutional farming activities in certain communities.
The idea was introduced in Egaulauna by a teacher based at Kupiano high school where DSAP provided technical assistance in agricultural activities.
According to Mr Wambon, taro farming in the Egaulauna and nearby communities had enormous potential and could be further developed.
Taro is a much-sought after food item and can be supplied for household consumption, local and retail market as well as for export.
“The taro project has generated a lot of interest amongst the Egalauna community and the people are very interested in new taro planting techniques that we are teaching them,” Mr Wambon said.
During the first harvest, the association invited Mr Wambon and other DAL officers to witness the occasion.
Mr Wambon told the people that the project was looking good and could become a focal point for conducting training programmes involving nearby villages.
He said the project had the potential to be expanded to other sites in Abau, Rigo and Kairuku districts.
He told them to work hard and become leading taro producers in the province.
The Egalauna farmers are planning to plant up to two ha next year.
Other crops that the people are growing include rice, bulb onion, radish, capsicum, cabbage, watermelon and ginger.
Posted by Malum Nalu at 10/31/2009 11:10:00 AM