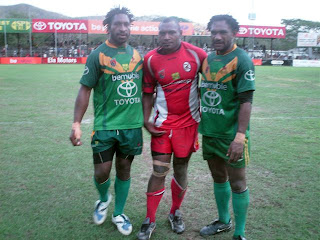 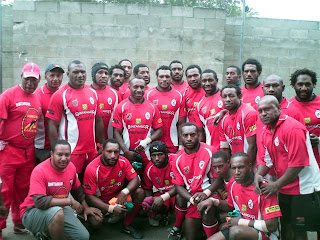 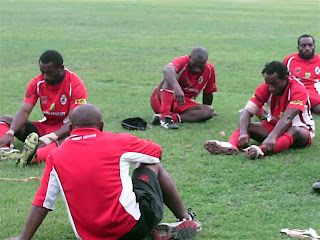 At the beginning of this year’s bemobile Cup competition, in the rugby league-mad town of Goroka, the Bintangor Goroka Lahanis were disparaged as a bunch of “no-hopers”.
The side was put together at the 11th hour, after local business house Bintangor Trading came in, when the Lahanis were on the verge of being dumped from the competition because of no sponsor.
How wrong these prophets of doom were, as Goroka’s ‘chocolate soldiers’, who they said would melt in the heat of battle, proved them so wrong.
At the Lloyd Robson Oval paddock yesterday, their supporters were outnumbered by legions of Mioks fans, including local ‘royalty’ in the likes of Enga Governor Peter Ipatas.
They walked off the paddock after 80 minutes gallant in defeat and proudly wearing the red badge of courage.
Captain Courageous Nigel Hukula, the ‘outsider’ who has become a hometown legend in Goroka, was philosophical about the loss.
“Half of the team are newcomers and no one gave us a chance at the beginning of this year,” he said.
“It’s a real credit to these young guys.
“It’s disappointing but it’s also a plus for rugby league in Goroka.”
Hukula gave kudos to the Mioks for being the better side on the day.
“It’s disappointing,” he said.
“We came here prepared after last week’s game, however, the Mioks wanted it more and they capitalised on our errors.”
Goroka coach Peter Danga concurred with Hukula.
“About 70% of the boys are young and inexperienced,” he said.
“At the end of the year, we became a formidable team and a force to be reckoned with.
“I thank all the boys for their effort.
“We’re looking forward to better things next year.
“We’ll come back bigger and stronger.
“I thank all our supporters here in Port Moresby and back home in Goroka.”
Enga coach Toksy Nema, who paradoxically is an Eastern Highlands, gave a vote of thanks to the vanquished.
“I must say ‘thank you’ to Goroka Lahanis for giving us a good game,” he said.
“We came here purposely to win this game and that’s exactly what we did.
“The boys played according to game plan, although they made some handling errors.
“Our training for the grand final starts today.”
Enga 18 (Jason Tali 2, James Gend, Thomas Kumgi tries; Joe Goni 3 goals) bt Goroka 10 (Kevin Iganufa 2 tries; Walter Hasu goal). Scrums: Enga 11-7. Penalties: 7-7. Referee: Moses Tolingling (Port Moresby).