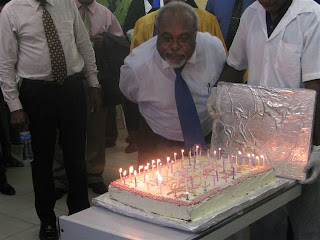 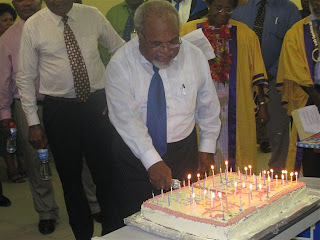 Prime Minister Sir Michael Somare had a surprise birthday party thrown for him by the of and Environment in last Friday.

Immediately after the 13th UNRE graduation at which Sir Michael was the keynote speaker, and the unveiling of the library extension and administration building opening – named after the Prime Minister – the UNRE surprised Sir Michael with two cakes (one for his birthday and one for his 42nd year in politics), as well as plenty food and drinks.

It was a special occasion for Sir Michael in that he was born on April 9, 1936, in Rabaul, province while his father was serving as a policeman.

Sir Michael was lost for words by the surprise and thanked all staff and students of UNRE, especially Vice Chancellor Prof Philip Siaguru, for making the day a special one for him.

In a powerful Tolai traditional ceremony, Sir Michael beat a Tolai tubuan with the tabu

Sir Michael traveled to in Kokopo on the new Falcon jet and flew out later that same day after the graduation.