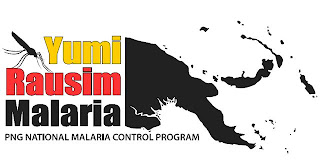 World Malaria Day, commemorated annually on April 25, marks a global effort to highlight the need for the prevention and control of malaria around the world.

is attempting to reduce malaria morbidity and mortality through delivering preventative, diagnostic and treatment services to all people at risk of malaria, especially pregnant women and children younger than age five who are more vulnerable to the devastating effects of malaria.

The National Department of Health is leading collaborative efforts with two major partners -- Rotarians Against Malaria (RAM) and Population Services International (PSI) – in fighting malaria, thanks to funding from the Global Fund to Fight AIDS, Tuberculosis and Malaria.

The national theme “Yumi Rausim Malaria” affirms a call for collaboration from everyone in the country to free from malaria, and urges all to sleep under a long lasting insecticide treated mosquito net each and every night.

Malaria has been identified as one of the top five health priorities in the country and the leading cause of hospital admissions. Approximately 1.9 million cases of malaria are reported annually at health centres and hospitals, and every year between 600 and 700 Papua New Guineans die from malaria in health care facilities. The socio-economic burden the disease poses to PNG is substantial.

A recent study from the Papua New Guinea Institute of Medical Research found that 64.6% percent of households surveyed in PNG owned a long lasting insecticide treated mosquito net, but only 39.5% of children younger than age 5 and 41.3% of pregnant women reported having slept under their net.

The programme includes a speech by the Minister for Health & HIV, Sasa Zibe. Two demonstrations will occur – one showing how a Rapid Diagnostic Test for malaria works and another on how long lasting insecticide treated mosquito nets are delivered to pregnant women through antenatal care clinics.