Brocade finally out of water 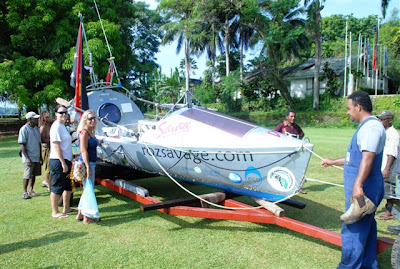 Roz Savage (centre) with Brocade in Madang as she is taken out of water. Picture courtesy of SIR PETER BARTER

Brocade, the boat of British ocean rower and environmental campaigner Roz Savage, is now out of water after an epic 47-day rowing voyage from Tarawa in .

Savage made landfall last at 8am Friday on Brocade, completing her three-stage trip and becoming the first woman to row solo across the .

She set off in her 23-foot boat from in mid-April on the final leg of her Pacific voyage.

In total, she spent about 250 days alone at sea, rowing more than 8,000 miles and taking an estimated 2.5 million oar strokes along the way.

Savage traveled from to in 2008, then on to last year, before finally arriving in Madang.

Savage said that after taking a well-deserved break in Madang, she and Brocade would be moving down to , , for the Indian Ocean stretch of her next epic voyage from to in .