Madang lays down the red carpet for woman rower 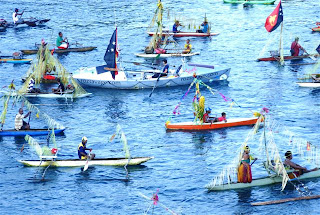 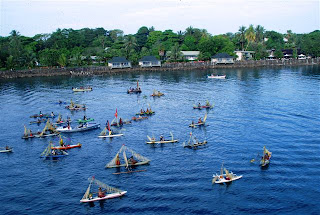 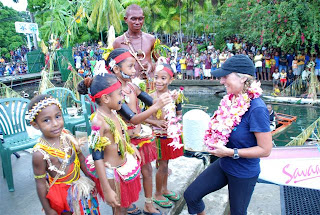 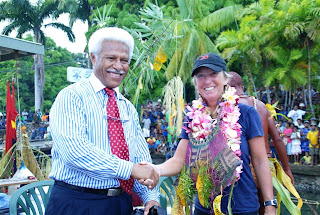 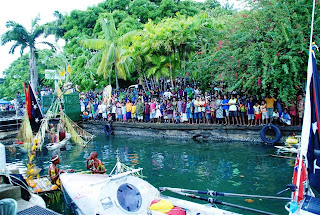 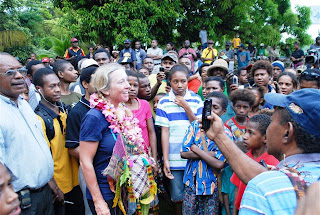 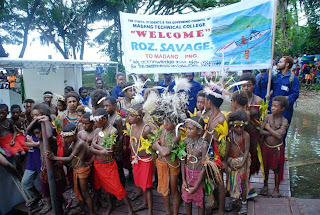 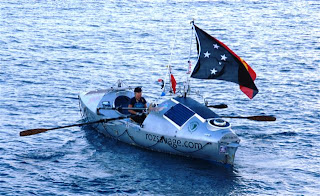 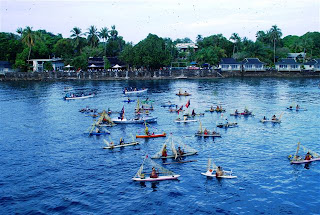 British ocean rower and environmental campaigner Roz Savage was feted like royalty when she arrived in Madang last Friday after an epic 47-day rowing voyage from Tarawa in .

Savage made landfall at 8am last  Friday, completing her three-stage trip and becoming the first woman to row solo across the .

She was met by flotilla of more than 100 traditional canoes, adorned in PNG style and PNG flags.

More than 5, 000 men, women and children, many in traditional dress – in one of the biggest events in Madang in recent times -  lined the entrance of Dallman Passage and Kalibobo Village waving to Savage she moved slowly into the dock at the Madang Resort.

On arrival she was met by customs, immigration, and quarantine and officially cleared and then welcomed by the Governor Sir Arnold Amet.

Literally hundreds of people shook hands with Savage, most of whom had pictures taken with her.

“The welcome was spectacular,” she said today (Sunday).

“I really had no expectations at all and I can’t believe how many people were there.

“It was fantastic and I really enjoyed being escorted by the canoes.”

Sir Peter Barter welcomed her, explained the purpose of her visit and Savage then spoke, saying she chose Madang on the advice of famous French oceanographer Jean-Michel Costeau, who visited Madang in the 1980s with his father, Jacques-Yves Cousteau.

Savage spoke of the million of strokes and how she had crossed an ocean.

She went on to tell the people that they too could make a contribution by many people doing small things to look after the environment.

She told the crowd that during her stay over four weeks she would visit schools, meet students and talk to them about protecting the planet.

Numerous people presented bilum bags, yabob pots and other gifts as an appreciation and the formal welcome was done by children from and students of .

Savage said she was overwhelmed by the red carpet welcome and was really enjoying the natural beauty of Madang.

“I want to get to know Madang a little bit,” she said.

“I went diving yesterday (Saturday) and Madang has some of the most-beautiful diving in the world.

“Walking around town, it’s been really good, with everyone wanting to shake hands with me and take pictures.”

Savage set off in her 23-foot boat from , in mid-April on the final leg of her Pacific voyage.

In total, she spent about 250 days alone at sea, rowing more than 8,000 miles and taking an estimated 2.5 million oar strokes along the way.

Savage traveled from to in 2008, then on to last year, before finally arriving in Madang.

“My Pacific row has been to raise awareness on climate change and to say that we will have to do our part,” she said.

Savage said that after taking a well-deserved break in Madang, she would be moving down to , , for the Indian Ocean stretch of her epic voyage from to in .