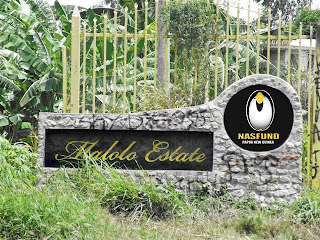 will not be able to afford housing

Papua New Guineans will not be able to afford housing, despite the emergence of the LNG projects in the country, according to Nasfund joint chief executive officer Rod Mitchell.

He dropped the bombshell in a report on Nasfund’s Eight and Mile-Mile housing sub-divisions to members.

“LNG will accelerate the emerging middleclass, meaning a small but growing minority will be able to see home ownership within their grasp.

“The flipside is that the gas project will draw more citizens from rural areas around the country to on the false premise of jobs and the glamour of big town life.

“For most, it will be a heart-filled experience of loss of identity, poverty and disconnect from what is often a rewarding rural life and culture.

“A city of half a million inhabitants is expected to swell in the next decade to over a million, of which most will reside in the exploding settlements on the outskirts of Port Moresby.

“And clearly we need to continue the discussion until we bridge housing reality with housing expectations.”

Mr Mitchell said the housing affordability debate would and must continue.

“The reality is that in the absence of higher family disposable income and a very-visible middle class, housing as currently being offered will remain unaffordable for most,” he said.

·        Banking, funding, superannuation and savings; and

·        Housing expectations cannot be met at an affordable price;

“Firstly, in the absence of a readily-identifiable middle class, there remains a lack of savings and disposable income to purchase a dwelling,” he said.

“This can be starkly illustrated in comparison to Australian home ownership.

“This means that the average house is valued at approximately nine times a workers salary.

“In PNG it is 24 times an average workers salary.

“If we look at family income, the house to income ratio falls to 5.8 in and 16 times in PNG.

“Clearly the average family and or worker in do not have the income generation to meet the current cost of housing.”

“Typical savings patterns of a private sector worker tend to be dominated by their superannuation, both at the compulsory component and often extra superannuation contributed voluntarily, to avoid extended family pressures from accessing savings,” he said.

“In effect, superannuation is often the only safe guard a worker has for savings accumulation and protection.

“However, having said this, if we assume the average worker is earning somewhere between K10,000 and K14,000, the employee share of their superannuation balance will after five years be around K5, 600.

“Superannuation is clearly part of the housing affordability equation but not the full solution.

“Government also has charges, the largest being stamp duty on the purchase of house which amounts to 5% of the purchase price.

“Banks are also looking very carefully at the credit worthiness of borrowers.

“Loan default is costly not only on the borrower but the bank as well.

“Evidence suggests that up to 15% of all housing loans at anyone time tend to be in arrears and subject to foreclosure.”

Mr Mitchell concluded that housing expectations could not be met at an affordable price.

“The lessons learned from Eight and Nine-Mile is that land servicing costs, irrespective of the price of the land, is expensive,” he said.

“Services such as bitumen roads, electricity, sewage, fencing, water can cost anywhere between K65, 000 and K80, 000 per block.

“Therefore, a house and land package will cost in the vicinity of K300, 000 before we include developer’s margin (the developer does not construct for free) and cost of finance.