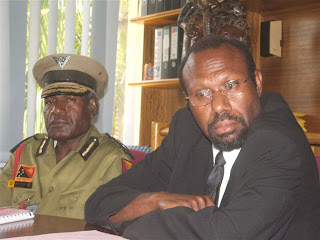 PRIME Minister Sir Michael Somare has taken over the Correctional Services ministry with immediate effect.
Sir Michael got tough yesterday, eight days after the Bomana prison breakout, as three warders and a person who was allegedly the driver of the getaway vehicle appeared before a magistrate yesterday for allegedly aiding the escape of the 12 dangerous prisoners.
Tony Aimo, who had held the position, is now Minister without Portfolio pending investigations into the Bomana prison breakout on Jan 12 by the Correctional Services and the National Security Advisory Council.
CS Commissioner Richard Sikani has also been suspended.
The decisions were taken by the National Executive Council in a special meeting yesterday afternoon.
The Prime Minister’s Office issued a short statement: “This is to advise that the Prime Minister had met with Minister Tony Aimo on 19 January and informed him that he will remain minister but without portfolio.
“The Correctional Service portfolio will be vested with the Prime Minister until further notice and after an investigation is carried out.”
During the meeting with Mr Aimo, Sir Michael also instructed the minister to meet with senior Correctional Service officials immediately and to make the necessary reshuffle in light of the prison escape. It is understood that Mr Sikani’s responsibilities are being taken over by deputy commissioner (operations) Henry Wavik, while deputy commissioner (human resources) Steven Pokanis has been moved up as acting deputy commissioner.
The acting appointments are expected to be announced by Public Service Minister Peter O’Neill. When contacted, Mr Aimo said it was the Prime Minister’s prerogative to sideline him.
“I as the minister accept the decision. The Prime Minister must be in charge of this pressing issue.
“I will work closely with the Prime Minister to ensure the smooth functioning of this very important State entity.”