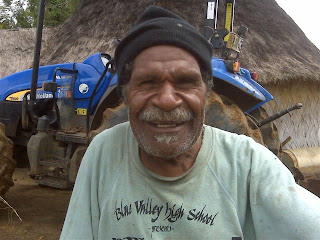 By REUBEN W SENGERE of CIC

Coffee rehabilitation is touching the lives of many genuine coffee farmers in .

“Is this the Coffee Industry Corporation that I know in the past?” asked Sime Bangkoma (pictured), a coffee garden owner in the .

He asked the question as such intervention had not happened in the coffee industry in recent times.

The CIC engaged the local group to rehabilitate the coffee trees under its district-by-district coffee rehabilitation programme.

The Bangkoma name is synonymous with the game of rugby league.

Sime Bangkoma is the elder brother of Napolean and Petrus Bangkoma, who have donned the coveted PNG Kumul jumper in the past.

The service provider group that carried out the pruning was a coffee farmer group that had been trained in rehabilitation.

According to the director for the programme in the district, Anton Ningiramu, the use of CIC-trained farmer groups would sustain the programme.

“We believe the farmer group members will implement such regimes in their own gardens as well as render their services to others,” he said.

“Farmers that have bigger gardens could also use the services of CIC-trained farmer groups in carrying out coffee rehabilitation work.”

The coffee rehabilitation is part of the district-by-district programme that is currently being piloted in Obura-Wonenara in Eastern Highlands province, Kundiawa-Gembogl in Simbu and in Western Highlands.

Sime Bangkoma was on the verge of abandoning his garden to plant kaukau (sweet potato) because of rampant cherry stealing.

“Registered wet mills should be the only place where cherry should be sold,” he said of this scourge.

“CIC is implementing the cherry ban policy which needs a concerted effort from all stakeholders for its success.”

Rice growing is becoming popular in Aiyura, popularly known as ‘’.

Local Obura-Wonenara MP John Boito is aggressively promoting the farming of rice so that the fertile has another alternate crop.