UK Government to support the preservation of Carteret Islands' Culture 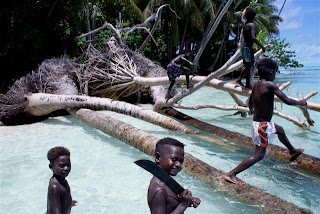 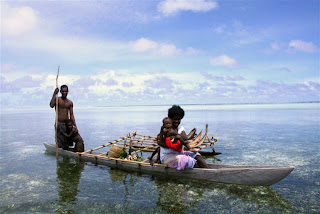 Captions: 1. A family - what does the future hold for them? 2. children playing on fallen coconut trees

The British High Commission in Port Moresby is funding the documentation of the Carteret Islands' unique culture to prevent and minimise loss, as well as to assist the islanders maintain their cultural continuity across all relocated groups.

The project which will cost more then K129, 000 when complete will document distinctive aspects of the islanders' culture including songs and dances, ceremonies and traditions, myths and legends.

This information will then be made available to future generations of Carteret Islanders and others.

The culture of the islands will also be documented in a film, which will be made in close co-operation with local NGO, Tulele Peisa Inc, and in consultation with the Carteret Council of Elders.

David Dunn, the British High Commissioner said, "As is everywhere in the world, people identify themselves with their culture, the Carteret Islanders been no exception, and with their island sinking and the relocation exercise in place, it is important that their culture is captured for the identity of the next generation and beyond."

The are sinking due to geological reasons associated with their volcanic origins. Overlaid on top of this are the effects of sea level rising and storm surges, which are accepted as deleterious consequences of Global Climate Change.