White tribesman at home in a wild world 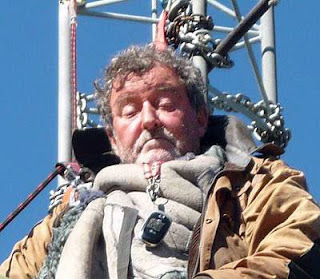 By ROWAN CALLICK in The Australian

THE hunger-striking NSW farmer Peter Spencer (pictured) is also an initiated member of 's Jiga tribe and was the chief of staff for Paias Wingti during his second term as prime minister from 1992-94.

Spencer was the dazzling star of PNG's embryonic tourism industry in the 1980s, when he developed his Plumes and Arrows Inn -- nicknamed the "Sticks and Feathers" - at Kagamuga airport just outside .

He would cordially greet groups of American or Japanese tourists in the hotel lounge in his Aussie persona, organise refreshments for them, and then return triumphantly in traditional dress - “arse grass" hanging off a belt around his waist, wooden shield, bow and arrows, and brightly painted face.

As his piece de resistance, the wirily built Spencer would insert a bone through his nose, which had been pierced as part of the painful and onerous initiation rites he had undergone.

He was a popular and well-informed guide for the mostly well-heeled visitors.

This was a colourful haven in a colourful era. In 1988, PNG was the scene of the world's then biggest gold rush, at its helter-skelter height, with 10,000 Highlanders clawing nuggets worth overall more than $100 million.

Australian accountant Ron Mealing, who had flown up from to become a gold buyer on the muddy slopes of , said at the time he had given up.

"It's very, very wild up there," he said, shaking his head.

"I realised Western rules do not apply here."

It was a wild world where Spencer, however, felt very much at home.

He became close to Jiga tribesman Wingti whose power base was in , and who used his hotel as a base for plotting his comeback as prime minister.

Wingti brought Spencer with him to his office in when he swept back to power.

Spencer exercised close control over media access, and also pursued some of his favourite big-picture themes, drafting documents positing solutions for PNG's many challenges -- just as he has been doing more recently, in his struggles over the constraints on Australian farmers.

Spencer has since said he left PNG about 15 years ago after a group of men invaded his house and tried three times to shoot him but the rifle misfired on each occasion.

They burned down his home and he flew back "down south" to .

He told then Courier-Mail columnist Michael Duffy "his efforts to reform PNG had cost him his marriage, his job and his house".

When Wingti was displaced by Julius Chan in 1994, Chan ordered a review of the visas of some expatriates associated with the Wingti administration, including Spencer.

During the turmoil of the next election, in 1997, when Wingti lost his seat, an attempt was made to burn down the Plumes and Arrows, which survives but no longer attracts the tourist parties of the Spencer years.

Like many of the Australians working in the in the years immediately before and after independence in 1975, Spencer felt that PNG had been short-changed.