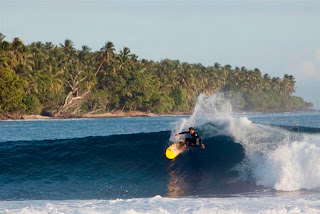 In search of the perfect wave at Ulingam Bay in Bogia, Madang province.-Picture courtesy of PNGSA 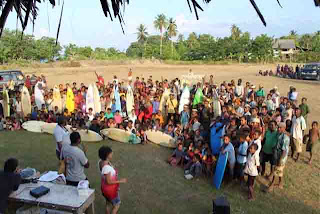 Surf culture tends to place a high value on fellowship, kindness, and cooperation, with surfers helping each other out when they can and working together towards common goals.

In line with this, the surfing fraternity in has come to the aid of the fledgling surfing community with a generous donation of boards, equipment and clothing which have been distributed to surfing clubs in PNG.

The goods arrived last year and the PNG Surfing Association has distributed them to the 10 clubs in PNG which include four in Vanimo, three in Kavieng, two in Port Moresby, and the baby of them, Tupira Surf Club of Ulingam Bay in Bogia, Madang province.

PNGSA president Andrew Abel said the surfboard donation programme started when Australians Saiid Metwali and Jamo Borthwick spread the word among the surfing fraternity there of the need to help aspiring surfers in PNG.

Surfing communities from Noosa in all the way to Sydney, NSW, collected boards, equipment and clothing which were shipped to PNG in a 20ft container.

“This relationship between the SAPNG and companies and individuals in , will essentially create a long-term bond between our two countries, break down the negative perceptions and create positive awareness of PNG and what we have to offer by way of tourism,” Mr Abel said.

“Through this, SAPNG with our partners like Coastal Watch and Surfaid International will help to bring about development through SAPNG as a conduit to village communities throughout PNG where surfing communities have been established.”

Bogia’s Tupira Surf Club, which has been established by Supreme Court judge Nicholas Kiriwom, was the first to receive its boards last November with the presence of Pacific Beat host Tania Bale, who will show footage of the event on the popular ABC television programme next month.

Mr Abel said negotiations were ongoing for a surfing cultural exchange programme involving the children of Bogia and a school in Gold Coast, , in order for them to experience different cultures and ways of life.

Further information can be sourced from the SAPNG website http://www.surfingpapuanewguinea.org.pg/.